Acer has added a new Android based smartphone to its beTouch series lineup which is known as beTouch E210. The beTouch E210 is an entry level smartphone which is targeted to those who look for smartphone but tight of budget. The smartphone is runs on the Android 2.2 Froyo operating systems and powered by a 416MHz processor. The Acer Android smartphone has been improved with full QWERTY keyboard for speed up the text-messaging. 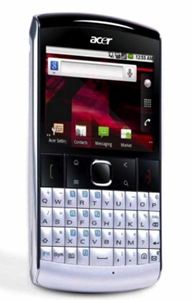 Featured with a 2.6-inch TFT touchscreen with 240 x 320 resolutions, the beTouch E210 is also equipped with a 3.2-megapixel camera. It boasts with A-GPS and Wi-Fi connectivity, has built-in 512MB ROM, 256MB of RAM, 3.5mm audio jack, FM tuner, micro-USB and comes with a 1300mAh Li-Ion battery. Besides that, it is Bluetooth enabled and supports mircoSD card slot.

The Acer beTouch E210 with dimensions of 115 x 62.5 x 11.5mm and weighs 109g is expected to be available in U.K. in March. However, the price of the new Acer Android smartphone is not yet announced.