Flickr is one of the most popular image hosting site on the Internet, where millions of photos and pictures been uploaded, hosted and shared from Flickr. As such, Flickr website may be blocked or denied access by companies, corporations and organizations in order to prevent employees from visiting Flickr during office hours, reducing productivity.

With all photos’ link location starts with http://www.flickr.com/photos/…/

The Flickr URL’s domain can also be changed to the following, which allows visitors to access the exact same web page:

Which means, the full URL takes some kind of http://www.flickr.mud.yahoo.com/photos/…/ 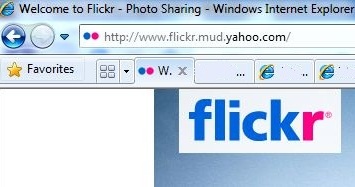