AOL has recently announced the availability of AIM 2.0.9.1 beta for Windows Mobile. The new version of AIM has been included a number of new features and changes for enhancing mobility experience. One of the notable feature is the Lifestream. The Lifestream allows users to keep tabs on what is happening with their contacts and the Lifestream tab has been added to the Buddy List for improving convenient. 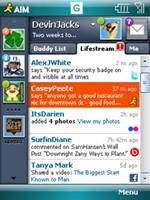 The Lifestream comes with a series of features, including the ability to get AIM activities such as status updates or add Facebook and Twitter services. Moreover, the users also have the possibility to update their settings through syncing to their accounts via lifestream.aim.com.