Apple has announced the next major release of its groundbreaking photo editing and management software – Aperture 2, featuring over 100 new features including streamlined user interface and a new improved image processing engine, aiming to make the program faster, easier to use and more powerful. 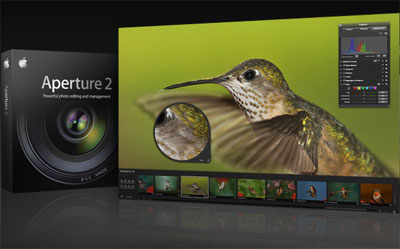 “Many of the most respected photographers on assignment all over the world trust Aperture to organize, edit and deliver their images,” said Rob Schoeben, Apple’s vice president of Applications Product Marketing. “With its simpler interface and lower price, anyone can take full advantage of Aperture’s power.”

“At the end of the day, it’s all about the quality of the image,” said Sports Illustrated contributing photographer David Bergman. “Even before I begin making adjustments, Aperture’s new RAW processing gives me better images with more visible detail and better color rendering than any other program
I’ve tested.”

“I used to have so much stress about post-production on a shoot, having to juggle multiple applications to make sure they all worked,” said Bob Davis, PDN Top Knots Wedding Photographer 2007. “With Aperture that’s no longer a factor. I can do everything all in one application.”

The new Aperture 2 is now available for a suggested retail price of $199, and the existing Aperture users can also upgrade to Aperture 2 for $99.