After the recent launch of the iPhone, now is the right time to take a look of the internal hardware components of this popular gadget. A group of enthusiastic has decided to dismantle a newly purchased iPhone just to find out what are underneath the stylish casing, which makes so many people mad about it. Besides curiosity of figuring out what are the components that made it so famous, some may also interested to know which vendor companies had actually made much profits through the deal with Apple Inc. 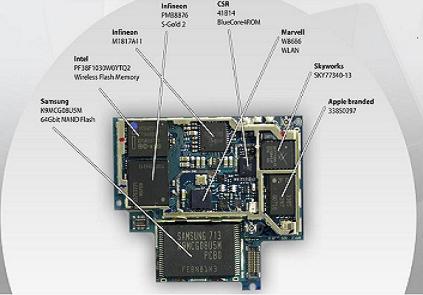 Speculations have been going on before the official launch of the iPhone that the center heart of the gadget was actually powered by Marvell but not Samsung ARM based processor. It proved to be wrong after dismantled the casing! Although the part number is unrecognizable if it is Samsung or Marvell chip as it just has an Apple logo and ARM wording on it, but it is believed that Samsung had won the deal over Marvell PXA family processor. However, the actual ARM processor core speed was still unknown due to no official announcement from Apple or trustworthy source but is speculated to be at least 620MHz which is far more sufficient with ample CPU headroom left after running multiple applications.

Marvell chip is not completely disappeared in the component lists. There is a Marvell chip that serves as WLAN IC for the wireless protocol 802.11b/g support. Besides these two chips, some other vendors’ chips were also seen such as Samsung 64Gbit NAND flash, Infineon multimedia chip, Intel 32MB Wireless Flash Memory, Wolfson audio chip and etc.

Some interesting part is there are some components that are similar between iPhone and iPod or even Apple TV. Example, Samsung MLC NAND flash was used in iPod before.

This is smart way of reusing some of the good stuffs in future product that will shorten the product development cycle and increase Time-To-Market (TTM). Meanwhile, the success story and increase demand of iPhone will definitely enable all the vendors/eco-partners to exceed higher volumes forecast in future order.