The American multinational corporation, Apple has announced an updated/redesigned version of its iMac computers as well as new versions of its iLife and iWork software. As you see in the photo, the new iMacs that come with a slimmer design, polished look, faster chips and glossy screens are the headquarters of an Apple product, which aimed to increase its market share in the PC industry. In simply words, the new desktop computers now replacing its old white plastic with a lighter and more environmentally friendly material – aluminum and glass. 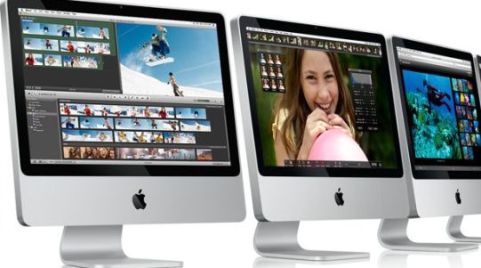 The new iMacs will come in only 20-inch and 24-inch versions, and the company will no longer offer a 17-inch iMac anymore. With the prices at $1,199 (20 inch) and $1,799 (24 inch) respectively, the new iMacs are also $200 to $300 cheaper than their predecessors. In addition, the new Macs also feature Intel Core 2 Extreme processors (up to 2.8GHz), up to 4GB of memory, ATI Radeon HD graphics card, up to 1TB of hard drive storage, 802.11n and Bluetooth 2.0 built-in. According to Steve Jobs, Chief Executive of Apple Inc, “The iMac has been very successful for us and we want to make it even better.”