We have mentioned quite a number of innovative ideas such as Tactile feedback for future multi-touch Tablet PC, Capacitive touch stylus and Universal Docking station for iPhone and iPod devices. Just recently, a new innovative idea has been filed by the Cupertino based company in patent office that could potentially change the way of how to control future future iPod and iPhone products utilizing its built in camera module. 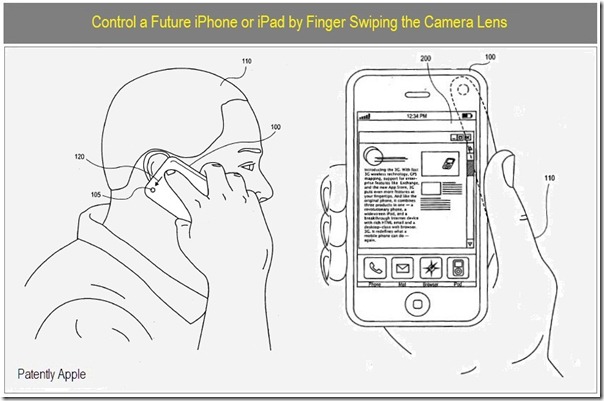 Based on the patent idea, users will be able to control incoming calls or voicemails and other operations by simply swiping their finger in front of the camera lens. Some of these operations include the ability to fast forwarding, browse through contact lists, flip web pages and many more depending on the directional swipes done by users (either pre-programmed by factory default or customizable by users). Since the camera function is widely designed and available in today’s mobile devices, this new brilliant idea no doubt has able to add more value by greatly simplify its usability using gesture control when combined with accelerometer sensors on top of conventional touch screen input detection.

No firm direction on when it will be available but it is highly anticipated that the new features could be another great selling point especially for its next generation iPhone, and potentially be integrated into its iPod and even iPad as well.