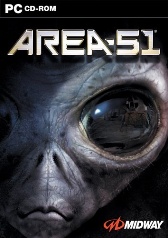 Area 51, developed by Midway Studios Austin (previously known as Inevitable Entertainment) and published by Midway for PC in 2005, PlayStation 2 and Xbox is a first-person shooter (FPS) genre of video game, and is a loose remake on the 1995 light gun video game of the same name. In the gameplay, players control Ethan Cole, a HazMat operative voiced by David Duchovny sent to the infamous base to investigate some manner of viral outbreak.

Area 51 game play has the plot about the U.S. Army has received a distress signal from Area 51 where a viral outbreak has just shut down the research facility and the automated quarantine procedures have locked all scientific and military personnel inside. A small Special Forces unit including Specialist Ethan Cole of the HAZMAT (hazardous materials) Division is sent to investigate.

As Cole, players delve into the massive levels within the confines of Area 51, only to discover a deadly mutagenic side effect of the virus that controls the minds of those infected, as well as an ancient alien colony buried beneath the facility. Players will uncover the truth behind chilling conspiracies as they come across the remnants of the extraterrestrial crash at Roswell, alien autopsies, and the faked lunar landing. Cole must solve the enigma of Area 51 before the viral mutagen is released and irrevocably mutates all life on Earth.

There are plenty of game sites that Area 51 for PC can be downloaded, among others:

Do anticipate the large download size of 1.93GB for the Area 51 setup installer (midway_area51.exe or midway_area51.zip).