While Intel continues to push its X86 architecture processors for mobile computing, ARM is also keep on upgrading its ARM architecture by integrating multi-core while further shrinking its die size with smaller process technology. According to reliable source, ARM is already planning to migrate to 45nm process technology so that it can integrate multi cores technology, in an attempt to boost up overall performance without affecting the physical foot print and more importantly its power consumption which is crucial for battery life time. 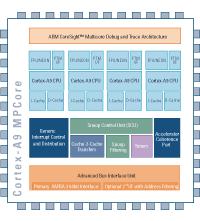 The next generation ARM core product will be mainly targeted for high end smart phone mobile devices where multitasking and graphics performance are important. With the introduction of ARM cortex A9 as the successor of current cortex A8 which has been designed widely including the recently announced Apple’s 3Gs as well as Palm Pre, consumers can expect even better performance boost with its out of order execution while allowing multi-threading technology for scalable performance to handle tasks processing simultaneously.

No exact time line of when this will be available, ARM forecasts that it should reach the market by mid of next year. TI (Texas Instrument) is one of the potential candidates that will leverage on ARM cortex A9 for its OMAP4 which supports full HD 1080p decoding capabilities as well as an impressive 20 Megapixel still image capturing for multimedia centric applications.