ARM core processor, which already monopolizes PDA and smart phone market is expected to find its path towards the newly defined ‘netbook’ market in short future. According to Rob Coombs, an ARM director in mobile division, ARM based netbook will be first run by powerful Cortex-A8 processor, followed by multicore Cortex-A9 in few months time, competing against hot selling Intel Atom and other low power X86 architecture processors. 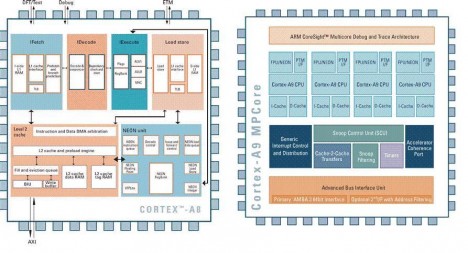 Coombs didn’t disclose exactly which ARM licensees are ready for Netbook market but out of those famous manufacturers such as STMicroelectronics, NEC, Samsung, Texas Instruments, Nvidia is believed to take a lead to extend existing ARM Cortex technology into this market. Obviously, Nvidia, which has already started to work on SoCs (System on Chip) like Tegra 600, 650 and APX2500 that integrate its graphics processors into ARM core will able to utilize its design ability to accelerate the development cycle compared to the rest.

ARM core processor stands a great advantage in terms of lower TDP (Thermal Design Power), however, these types of ARM based netbooks will have to stick back to Windows Mobile, Windows CE or Linux operating systems at this moment, unless Microsoft plans to validate ARM architecture with XP or Vista OS.