Just recently, Asus CEO Jerry Shen has disclosed some of the new features that will be added into its next generation Eee PC notebook. Named as Asus Eee 900, the new machine could be potentially powered by Intel Atom (codenamed Diamondville) that is famous for its low TDP (Thermal Design Power) promoting longer battery life. 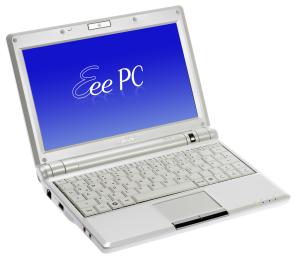 Some of the major improvements include the screen size increment from current of 7-inches to 8.9-inch, with resolution improvement to 1024 X 600 from existing 800 X 400. According to Jerry, Asus has taken customer feedback into consideration for bigger screen and higher resolution with greater visual experience. Without compromising its outlook, the machine will be kept to the same size without the need of bigger housing by redesigning its stereo speaker position. Besides, the laptop is believed to be backed up by 1GB RAM and 12GB storage capacity (current model is only 8GB) which makes it more powerful as compared to current one. The new version of Asus Eee PC will be released in May 2008 at a retailed price of $499. Even though it is more expensive that current version, but looking at its feature sets and especially the powerful Intel Atom processor, it could be a good choice when comparing to other products in the same price range.