Blue screen is nothing new for windows user and it happens when windows encounter critical system error which can cause to system shutdown in order to prevent further damage. The causes of blue screen are normally due to incompatible DLLs or bugs in kernel of the operating system, physical faults such as faulty memory, power supplies, overheating of computer components and hardware running beyond its specification limits. When blue screen happen, it will create a mini dump file which contains information about the crash and this information could be very useful to analyze what is wrong that caused the blue screen. Now with BlueScreenView, it allows you to view the mini dump file information easier and faster, besides ability to highlight suspected drivers that caused the crash as well. 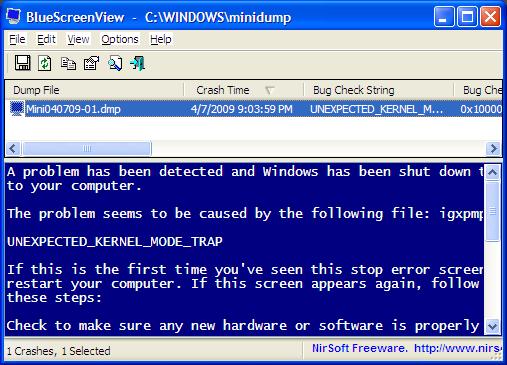 BlueScreenView is able to scan all mini dump files created during blue screen crash and displays the information for quick glance. Every crash generates its own dump file and these dump files are listed in the upper pane with filename, date/time of the crash, and the basic crash information as displayed in the blue screen such as Bug Check and 4 parameters. To view the details of the device drivers loaded during the crash like product name, file version, company, address in stack , from/to address and etc, you can view it at the lower pane and drivers that their addresses found in the crash stack will be highlighted with pink color, that will definitely help you identifying suspected drivers that cause the crash easily. Currently, the lower pane has 3 different view modes (Options -> Lower Pane Mode) in which you can switch to any one of them as you preferred. All Drivers mode displays all drivers that were loaded during crash and drivers that their addresses were found in the stack will be marked with pink color. Only Drivers Found In Stack mode displays drivers with addresses found in the stack of the crash only and Blue Screen in XP Style mode displays a blue screen that similar to what windows displayed during crash.

BlueScreenView v1.00 is absolutely free to download and without an any installation required, just run the executable file to display dump file details. While it is compatible to run on Windows XP/Server 2003/Server 2008/Vista/7, only 32-bit system is supported and dump files generated by 64-bit system will not be able to read by BlueScreenView at this moment.