BMW and Apple Collaboration in iPhone Support for its Latest Models

BMW, the Germany automobile maker has recently announced that the iPhone usage in its latest automobile models will be supported. This is a follow on announcement when this major auto maker cooperated with Apple Inc to integrate iPods support across its luxury model line back to 2004.

Although not much details have been disclosed about the integration, but we foresee that the owner will be able to access and control its iPod functionality via his vehicle controls and select the audio track on its navigation system. On top of that, making voice calls and controls via Bluetooth are possible on its in-dash i-drive system. Just imagine that your iPhone will be seated in the cradle on the dashboard and you can control all the feature sets by pressing dedicated buttons on the steering wheel while you are on the ride. 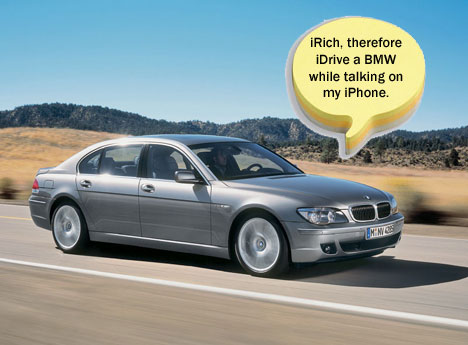 However, BMW emphasized that it will not guarantee the device performance or functionality in its recent disclaimer. This statement is understandable as it is only automobile maker but not electronics gadget manufacturer.

BMW further disclosed that the integration will be available on its 3, 5, 6 Series and its X4 model which is manufactured in 2007. No doubt, this is the right move to enable the iPhone owners have the same ability to enjoy music and voice calling seamlessly on the move.

We should expect to see more automakers working closely with Apple Inc to follow the trend in near future. Who knows, one day the iPhone could be packaged in when you purchase an executive luxury BMW 5 Series!