Windows 7 Beta Milestone 1 (M1) build 6.1.6159.1 (the ISO image for Windows Seven M1 6159 is available for download) is a pretty ‘old’ release which is packaged early 2008. And Microsoft has added some time bomb limitation into the beta code, which set the operating system to expire after the trial period ended (as of current status), regardless of the activation and validation status. When expired, Windows 7 M1 goes into the infamous Windows Vista anti-piracy kill switch, Reduced Functionality Mode, which has been scrapped in Windows Vista SP1.

In Windows Vista RTM, RFM (Reduced Functionality Mode) is used to deal with pirated, unactivated or expired copies of the platform when the system fails to activate or unable to pass the validation. In test builds of Windows Vista and Windows 7, Microsoft also implements RFM to stop access to development versions of code with a fixed date as time bomb, even if the copy of OS has been activated, although RFM is not found in Release Candidate (RC) versions of Vista SP1, which expire on June 30, 2008. Instead, the system kernel stops functioning one hour after system boots up with END_OF_NT_EVALUATION_PERIOD error message.

Apparently Windows 7 M1 6.1 6519.1 is also falling behind the expiry time bomb. Right after installation at current time, the system goes straight into RFM state, due to expiration of the test-period for the build, with a dialog prompting user to select option of “access your computer in reduced functionality”, “type a different product key” or “contact Microsoft to help resolve this problem”. As it’s already expired, connect to Microsoft online to activate online is no longer an option, although user still have access to the browser in RFM.

The Windows 7 M1 Reduced Functionality Mode can be hacked and bypassed easily, in a hack method that similar to cracking RFM in Windows Vista. To hack and skip RFM to restore and log on to Windows 7 desktop, click on Access your computer in reduced functionality option in the “Windows Activation” dialog.

An Internet Explorer 7 (IE7) window should be opened. Type C: or C:\Windows into the Address Bar, and then hit ENTER. Doing this will open Windows Explorer.

In the Windows Explorer, double click on Explorer.exe. Alternatively, go to Computer directory, hold down Shift key and right click on any system drive to select Open Command Window Here to open a command prompt. Then type Explorer and hit Enter. 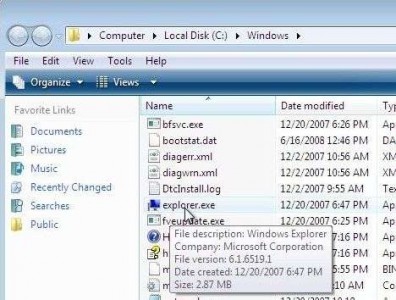 The normal graphical user interface (GUI) for Windows 7 will be restored. However, user may need to perform these steps on every time the system is rebooted.