Looks like Skype is crashing again, barely two weeks after the Skype network down for “a few users” and causing the Skype client app to crash on loading. This round, the Skype program does not stop working. Instead, users are unable to sign in to the network.

The downtime appears to be much severe than the last round, although Skype still saying that “a small number of you may have problems signing in to Skype. We’re investigating the cause, and hope to have more details to share soon.” The downtime appears to have lasted for at least an hour, and affect almost every Skype users, anywhere in the world.

Skype users who are signing in are forced to logout, and can’t sign back in. The Skype status always show connecting, perpetually. If you clear your login information, and start afresh, Skype will present the following error message: 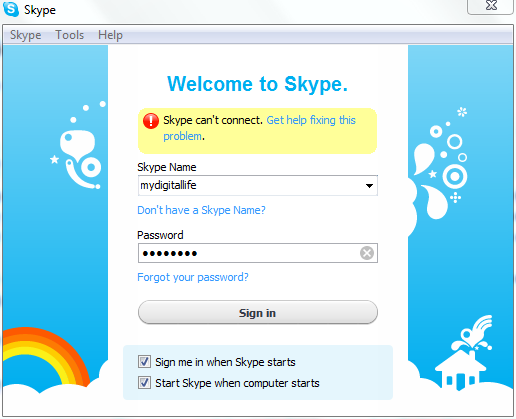 Skype has said that it has identified that issue that cause the network outage, and have begun to implement fix to resolve the unable to sign in issue, and thing will get better in the next hour or so.

A configuration problem has meant that some of you have been disconnected from Skype.

We’ve identified the cause of the problem, and have begun to address it. If you’ve been affected, you should start to see improvement in the next hour or so. You shouldn’t need to manually sign back in to Skype – it should reconnect automatically when it’s able to do so.

Update 1: Skype is up again.

Update 2: Skype is down again, barely up for less than 30 minutes.

With such a frequent issues affecting Skype after the $8.5 billion acquisition deal by Microsoft is announced, and not even implemented yet, we can’t help but hope that it’s not a Microsoft curse.