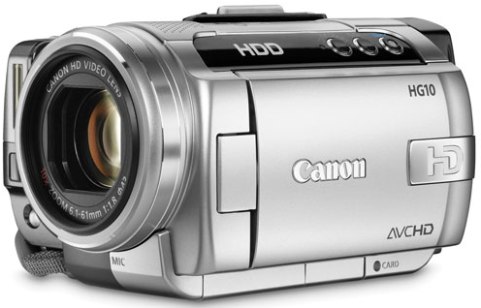 With its Photo Grab function, the users also can grab 2.0 megapixel (1920 x 1080) photo shots directly from the HD video footage during playback. In addition, the Canon HG10 also can capture 3.1 megapixel photos to a miniSD memory card.

“The HG10 HD Camcorder is ideal for preserving life’s most important moments,” said Yuichi Ishizuka, senior vice president and general manager, Consumer Imaging Group, Canon U.S.A. “Whether it is recording the 30 seconds of a grandchild’s first at-bat or nonstop recording time at a wedding from the ceremony through the reception, hard disk drive camcorders are beginning to dominate the High Definition market, and with good reason.”

The new Canon HG10 HD Camcorder which weights only 19.92 ounces with the lithium battery inside will go on sale in coming October for $1299.