Casio has recently announced the launch of its latest HIGH SPEED EXILIM EX-FH20 digital camera, which able to capture 40 high resolution, 7 megapixel photos per second and can record high speed movies at up to 1,000 frames per second. 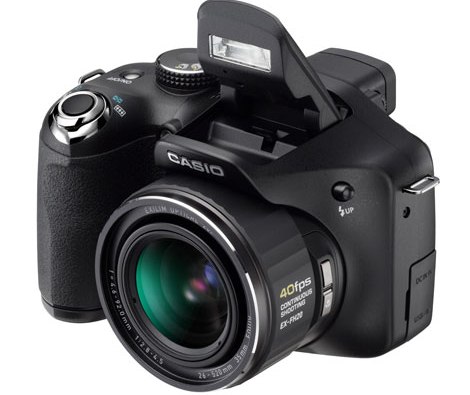 “Casio continues to create a new digital camera market focusing on high speed capabilities with the introduction of the innovative HIGH SPEED EXILIM EX-FH20,” said Bill Heuer, Vice President of Sales for Casio’s Digital Imaging Division. “The new HIGH SPEED EXILIM series allows for images to be captured faster than ever before without compromising image quality.”

According to the company, “While maintaining the ability to perform at speeds unmatched by the world’s top digital SLRs, the new HIGH SPEED EXILIM EX-FH20 is designed to appeal to a broader range of users. In addition to simplifying controls by placing all shooting mode settings on a single dial, Casio also gave the EX-FH20 a 20X optical zoom on a surprisingly compact body, 27% smaller and 28% lighter than the EX-F1. Its speed and ease of use truly puts this camera in a class of its own. In recognition of these unique characteristics, with today’s release of the new EX-FH20, Casio has launched the new HIGH SPEED EXILIM series, which includes this camera and the even faster EX-F1. Casio expects the revolutionary capabilities of its HIGH SPEED EXILIM cameras to generate entirely new applications for digital photography.”

The new Casio High Speed Exilim EX-FH20 digital camera which incorporates 3-inch LCD display and electronic viewfinder is expected to be available in coming October for about $600.