The default photo or video file name generated by camera has a standard naming convention format such as IMG_xxxx.jpg or MVI_xxx.avi which is not meaningful at all. By looking at the file name, you probably don’t have any clue of what is the photo about until you open the photo to view it. If you would like to change file names to something more presentable, then Caterpixer is probably one of the good and powerful tools that is able to rename files in batch with few options provided. 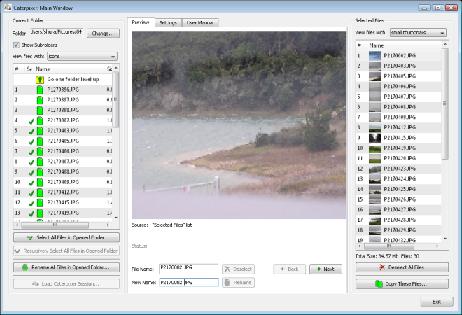 Caterpixer is a freeware that being designed with user friendly interface. Basically it provides two main functions. The first one is the ability to rename file names in batch including subfolders. The second feature is to rename file names in current folder and then copy them to another folder. If you set the destination folder to be the same as source folder, then you will notice that another set of files will be created with the new name that you have configured with the original file names remained unchanged. On top of this, the second feature allows you to reduce file sizes by reducing quality of pictures. Unlike other tools, Caterpixer has been designed with few flexible features which gives you more control on renaming file names. You can rename file names according to few options provided such as add file index position to the prefix file names (you can choose to be either number, letter or combine both variants), add note to the file name as you like, add destination folder name to the file name, add parent folder name to the file name, add file creation date to the file name, add original file name and add modified original file name with all numbers replaced with letters. For options that you have selected, it will be separated by delimiter and it even allows you to choose the type of delimiter as such as space, underscore, dash and dot. After some testings and observations, I realize that when “add modified original file name with all numbers replaced with letters” option is chosen, the number will be replaced with long string of letters, which is not the same as what it is claimed. Anyway, it doesn’t impact the overall usage and its functionality at all.

Caterpixer ver 4.3.4.4 is absolutely free to download and is compatible to run in Windows XP/Vista.