CES 2010 (International Consumer Electronics Show) is happening in Las Vegas, Nevada, USA from January 7 to January 10, 2010, featuring 2700 exhibitors. And one of the exhibitor is Microsoft, whose CEO, as a tradition, also delivers pre-show keynote address to kick off the CES. 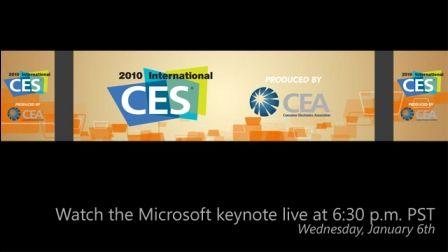 Steve Ballmer, chief executive officer of Microsoft, who replaced Bill Gates to deliver keynote during CES 2009 for the first time, and Robbie Bach, president of the Entertainment & Devices Division, are scheduled to deliver the pre-show keynote address at 6:30 p.m. PST on Wednesday, Jan. 6, at the Las Vegas Hilton, Hilton Center.

For members of the media who cannot attend, and prefer to watch the keynote address on TV, satellite feeds containing keynote highlights is also available through the following coordinates: