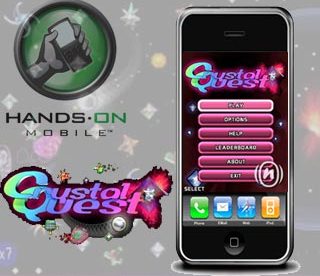 “It is a tremendous pleasure for us to re-release this beloved title that so many gaming fans have memories of playing for countless enjoyable hours. It’s very exciting to recognize Crystal Quest’s Mac roots by re-releasing a new and better version for iPhone and iPod touch,” said Niccolo de Masi, president, Hands-On Mobile. “With its addictive gameplay and built-in fan base, we know that Crystal Quest will be a huge hit worldwide.”

“Good old-fashioned arcade games are making a comeback because they are still just as much fun as they were 25 years ago,” said Patrick Buckland, veteran game developer. “The idea for the game came from a simple observation that people like to clean things up. Present them with a chaotic playfield and build the game around erasing it. There’s something built into us all that makes this enjoyable. Crystal Quest was hardly the first game to feature such an experience, but it’s probably the first game that was blatantly built around this concept.”

The Classic Crystal Quest Game for iPhone and iPod touch is now available through Apple’s App Store for $4.99.