Sometimes users could be so preoccupied that they forget about the number of programs running simultaneously on their computer. This could easily clog or halt the operating system and cause some minor inconvenience. Users could just right click the app and close it from the Windows taskbar, or alternately, go to Windows Task Manager and stop the app. If users need an easier method to close the apps they no longer require, the little freebie, JustCloseSomeTasks, probably could help.

Technically, JustCloseSomeTasks is an AutoHotKey script which allows users to automatically select a set of inactive windows and close them all with just a single mouse click. When users press a hotkey, the program will pop up and show users all the running tasks. It shows users all current tasks and the time elapsed from the last point of activity. Users can configure how long they want the program to wait for the inactive tasks to be closed from their last activities. Besides closing existing tasks, JustCloseSomeTasks also allows users to close tasks for a particular session only or for future sessions. It can also indicate which tasks have not been used for a period of time and close these automatically. 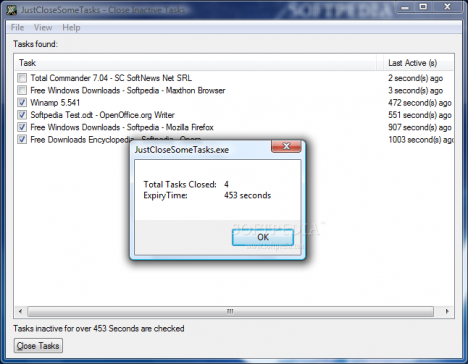 Even though JustCloseSomeTasks (download link) is not a complicated or sophisticated application, and many users might think that this is an extraneous app which they don’t really need, it could be useful for someone who tends to run multiple programs and always forget to close them. It happens when you are interrupted by phone calls, attend to customers, called for a meeting abruptly, etc. JustCloseSomeTasks will do the job automatically for you. JustCloseSomeTasks is portable and users can store it on a flash drive and carry it along to use on other computers.