At a June 2006 conference in Japan, a Dell laptop suddenly exploded into flames. Luckily for its owner, the explosion occurred while the PC was sitting on a table and not in his lap. Gaston, a reader of the Inquirer, witnessed the malfunction and reported that the notebook continued to burn, producing several more explosions over the course of about five minutes. 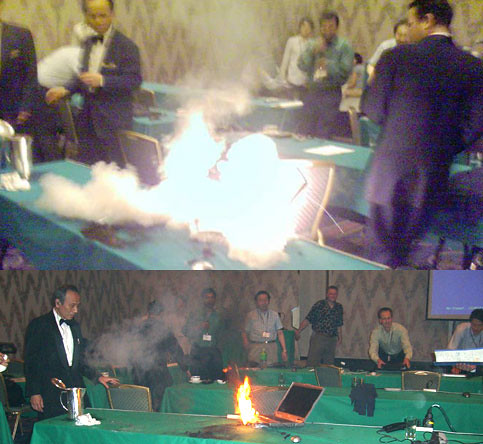 The model of the exploding Dell notebook at this conference wasn’t specifically mentioned. However, Dell obviously believes that the problem is with the battery and not the laptop itself. On Monday they issued a voluntary recall on all batteries that were shipped worldwide between April 1, 2004, and July 18, 2006. This comes to about 2.7 million battery packs shipped in the U.S. and an additional 1.4 million in other nations. This is also the largest safety recall in the history of the consumer electronics industry.

If you ever find yourself in a similar situation, Gaston has some advice for you: “Fire extinguishers leave a mess on your suit and belongings; pack your stuff (if you can) and leave, leave, leave!”

Unfortunately it’s probably only a matter of time before something like this happens on an airplane.