Similar to Microsoft Mathematics Add-In which greatly simplifies the authoring of complex mathematical equations, Microsoft has officially announced the Chemistry Add-In for Word 1.0 for the chemistry community to document the chemical content and information in Word documents.

The Add-In, which is also known as Chem4Word was firstly revealed in March 2010 as Beta release. The Chemistry Add-In for Word is jointly developed by Microsoft Research and the University of Cambridge to simplify the authoring of the subscripts and superscripts for the electrons and isotopes. The scientists and academicians can utilize the Add-In to create and edit  the chemical labels, formulas and even 2-D depictions in Word 2007 and 2010 documents. Chem4Word incorporates Chemical Markup Language (CML) to realize the semantic-based chemical authoring tool that enables both human and machine to understand the underlying semantics of the documented chemistry. The powerful Chemistry Add-In for Word is an open source project and hence available free-of-charge.  Here’s the steps to equip your Microsoft Word with Chemistry Add-In: 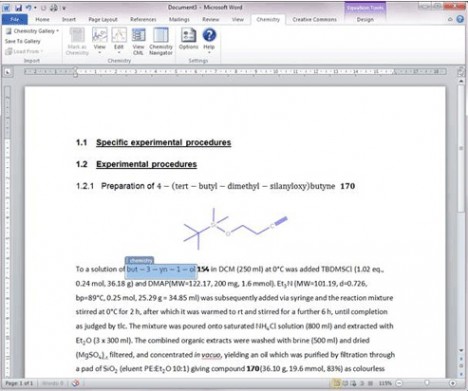