Within days of ZuneHD been hacked with OpenZDK, which allows Zune developers to develop or port applications and games on Zune system platform without limitations imposed by XNA, the nostalgic game, DooM, has been ported to Zune HD to be run directly on Zune firmware and hardware.

Doom is a classic first-person shooter (FPS) video game developed by id Software back in 1993, which dramatically transform the gaming culture into mainstream. DooM pioneered the networked multiplayer gaming, and support for customized additions and modifications via packaged files in a data archive known as “WADs”, after the extension of the data files containing the mods, which is an acronym for Where is All the Data. Estimated more than 10 million gamers have played the game within first two years of release.

OpenZDK developer, Netrix is the one who has ported Doom to Zune HD, and published the work on zuneboards.com. The ported Doom includes shareware WAD (map pack). Gamers who have a registered or retail WAD can remove doom1.wad in data/Content directory, and replaced with full version WAD. To replace a WAD that is already been deployed to Zune, user must first delete Doom from the Zune, then redeploy with the new WAD. You will not lose your saved files by deleting Doom.

The full version of Doom (Ultimate Doom) as well as the Doom sequels can be obtained legitimately through Steam. The WAD files should be installed with the game into the Steam directory, where they can be copied in with Doom for Zune HD.

You can move using touch or tilt. Controls are changeable in Options -> Controls. Pressing “Calibrate Tilt” resets the forward/backward tilt to the angle that you have your Zune so that you can play horizontally, vertically, or at some angle in between.

Do not press the home button though, as it does not close or exit the Doom, and may hang or brick the Zune temporarily. To exit from Doom, exit via the menu or touch the screen with four fingers instead of pressing the home button.

The developer is commited to bring more features to the Doom on Zune HD, including sensitivity adjustment, ability to restart upon exiting, ability to choose which WAD to load, and joystick-like movement. However, do note that Doom causes DRM music and official XNA games or apps to be inaccessible after playing. Restart Zune to fix this issue.

To install, unzip it and run deploykit.exe.

Here’s a video demonstration of playing DooM on Zune HD, and some screenshots: 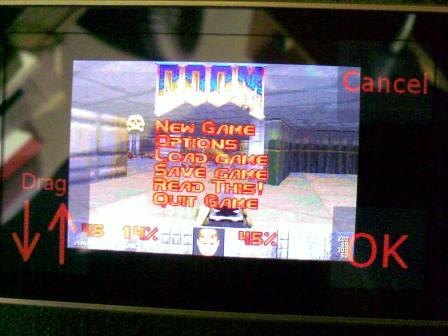 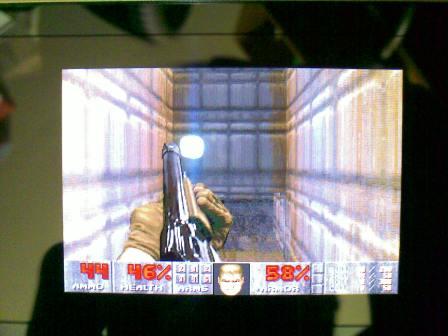