One simple yet effective way to fight against malicious programs is to keep an eye on the programs running on the computer and respond if something unusual or unexpected happens. Of course this is quite impractical as nobody will spend time to manually monitor the system. Hence, the alternative is to get a watchdog program to do the job and alert you when some funny action take place, e.g. a program tries to install or uninstall something, changes to registry files, changes to the default home page, etc.

WinPatrolToGo is a single executable file designed to run from a portable device such as a USB flash drive, portable hard disc, etc. The advantages of WinPatrolToGo are it is easier to be carried around and run without leaving any leftover files or registry entries on the computer. This program is free and fully functional. A summary of the features include:

WinPatrolToGo can be downloaded via the link here. Users can directly download the application to their USB flash drive. The file size is less than 600k and it supports all Windows OS version including Windows 7. 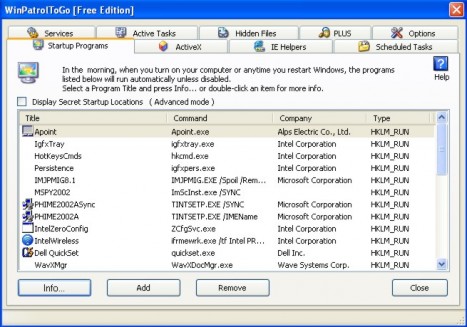