Posted: May 8, 2011/Under: Android/By: My Digital Life Editorial Team 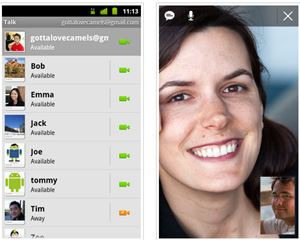 Key features of the Google Talk for Android includes:

Google Talk with video and voice chat has already started to delivered to Google Nexus S devices as part of the Android 2.3.4 over-the-air update. Other Android devices will have to wait until the phone manufacturers such as HTC, Samsung, Motorola, LG and etc to start offering upgrade to Android 2.3.4 for their respective phones in order to get Google Talk with video and voice call feature.

If you can’t wait for the Google Talk with video chat support to come to your phone, which may take weeks or months to arrive, a hacker named britso has managed to extract Google Talk 1.3 app with video plus voice call support from Google Nexus S Android 2.3.4 update, hack the SigninActivity.smali to comment out a line so that the app works on other devices. The app is then re-compiled and pushed as the APK file for installing into other Android mobile phones running Android 2.3 or above.

Listed below are several ways on how to instal lGoogle Talk with voice and video chat support onto your Android smartphone. Note that the hack only works on rooted Android phone.

The download links of Google Talk apk is available from xda-developers.com (registration required).

Method 3: Via a Flashable Update

Backup Talk.apk in case you want to go back to original version or encounter error.

Note that video chat may not work for most non-Google Nexus S phones. Some users have reported that installing “GoogleServicesFramework.apk” from the Google Apps Pack after version 20110503. However, the workaround does not work on all models.