A new version of iOS has been released, though it’s still not yet the highly anticipated iOS 5. The new version of iOS is version 4.3.5, with the exception of iPhone 4 CDMA (Verizon) version which upgraded to version 4.2.10, and was released barely a week after the release of iOS 4.3.4/iOS 4.2.9 which patched a vulnerability on PDF viewing that been used a jailbreak exploit. 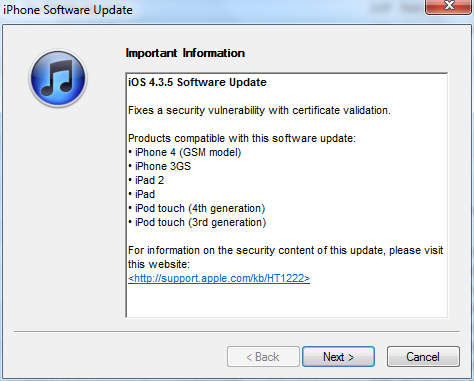 iOS 4.3.5 is a relatively minor update though, which fixes another vulnerability found. The vulnerability is related to certification chain validation issue. According to HT4824, the issue is described as:

Impact: An attacker with a privileged network position may capture or modify data in sessions protected by SSL/TLS

The update is available through iTunes.