Skype has released it second beta version of Skype 4.0 for Windows users. Skype 4.0 beta 2 is a revamp version of beta 1 which released in June. The most significant difference between beta 2 and beta 1 is the user interface. The beta 1 using the full screen of window by default while beta 2 offering a new compact view option. 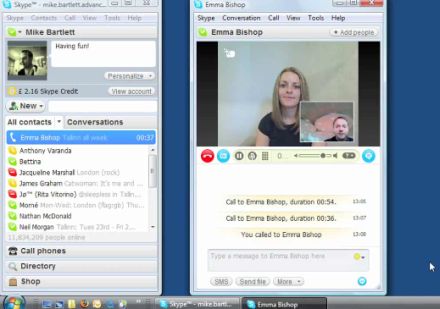 The beta 1 version has made the user very difficult to perform multitasking as it occupied the full screen. Therefore, Skype 4.0 beta 2 has overcome it by offering it looks like Skype 3 with a contact list in one window and chat, audio or voice window showing up in a second screen.

Beside that, the new beta version also reintroduces contact groups that allow user to arrange their contacts by category and the notifications which will show alerts in Windows Taskbar, system tray and in the program itself. So that, the user will very hard to miss out a call or message.

Base on CNET reports, Skype will plan to release at least one more beta version of Skype 4.0 before the final release. That version expected to include the features like call history, public chats, birthday notifications and others.

Currently, Skype version 4 beta 2 is available to download at .