Microsoft has many channels to distribute and release the Windows Vista Service Pack 1. One of the distribution channels is OEM partners, typically made up of companies like HP, IBM, Dell, Sony, Acer, ASUS, Lenovo and other system builders. These PC hardware manufacturers produces desktop and notebook (laptop) computers that pre-factory installed as Vista system with OEM product key.

OEM partners get official and final version of Vista SP1 and OPK (OEM Preinstallation Kit) much earlier from Microsoft so that the new version of Vista can be incorporated into OEM copies of Vista sold with new sytem. While normal consumer end users have to wait a little bit longer till March to have access to downloadable standalone SP1 update package, which can also be used to install while offline.

Now the .IMG image files of Vista’s Service Pack 1 from OEM Partner Center has been leaked. In fact, it’s possible enroll as a registered member of Microsoft Partner Sites and download the Vista SP1 from the Microsoft OEM server.

For those who unable or don’t want to register, here’s the description for Vista SP1 from OEM Partner Site: 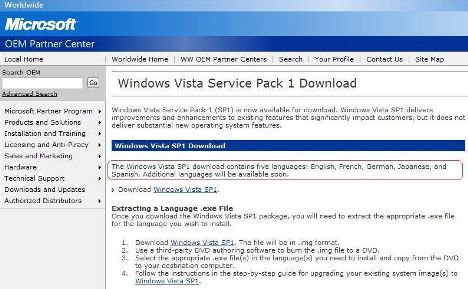 Once you download the Windows Vista SP1 package, you will need to extract the appropriate .exe file for the language you wish to install. 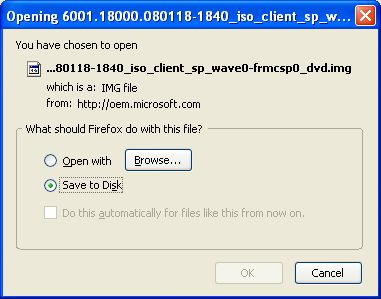 After downloading, use image manipulation software such as PowerISO and ISOBuster to extract the .exe service pack setup installer.