Motorola and Verizon Wireless have announced the launch of the world’s first smartphone with Android 2.0 – DROID by Motorola, which features the brainpower and breakneck speed of modern smartphone, combining 3.7″ touchscreen display, 5MP camera, slide out full QWERTY keyboard, high-speed Web browsing and voice-activated search capability in a single device. 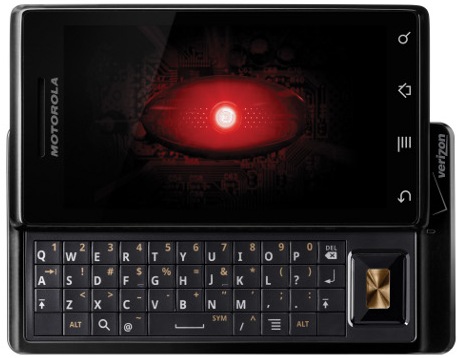 Features and specifications of DROID by Motorola (Verizon Wireless):

“This is an exciting announcement for Verizon Wireless, as the DROID by Motorola is the first device that we are bringing to market under our ground-breaking strategic partnership with Google,” said John Stratton, executive vice president and chief marketing officer of Verizon Wireless. “DROID by Motorola gives customers a lifestyle device with access to more than 12,000 applications that will help them stay in touch, up to date and entertained, using the best 3G network in the country.”

DROID by Motorola smartphone which measures 2.4 x 4.6 x 0.5 inches and weighs in at 6 ounces is slated to be available exclusively from Verizon Wireless on November 6 for $199.99, after a $100 mail-in rebate with a new 2-year service contract.