If you’re looking for enhancing the protection and defense against malicious attacks and hacking, consider Enhanced Mitigation Experience Toolkit (EMET), a free utility provided by Microsoft which is mainly meant for enterprise users. EMET helps to detect and block exploitation techniques that are commonly used to exploit memory corruption vulnerabilities, and prevent vulnerabilities in software from being successfully exploited.

EMET anticipates the most common actions and techniques adversaries might use in compromising a computer, and helps protect by diverting, terminating, blocking, and invalidating those actions and techniques through various security mitigation technologies. These technologies function as special protections and obstacles that an exploit author must defeat to exploit software vulnerabilities. Although these security mitigation technologies do not guarantee that vulnerabilities cannot be exploited. However, they work to make exploitation as difficult as possible to perform. Thus, EMET helps protect your computer systems even before new and undiscovered threats are formally addressed by security updates and antimalware software.

EMET also provides a configurable SSL/TLS certificate pinning feature that is called Certificate Trust. This feature is intended to detect (and stop, with EMET 5.0) man-in-the-middle attacks that are leveraging the public key infrastructure (PKI).

Enhanced Mitigation Experience Toolkit, as its name implied, is a security mitigation technologies, and are designed to make it more difficult for an attacker to exploit vulnerabilities in a given piece of software. EMET allows users to manage these technologies on their system and provides several unique benefits: 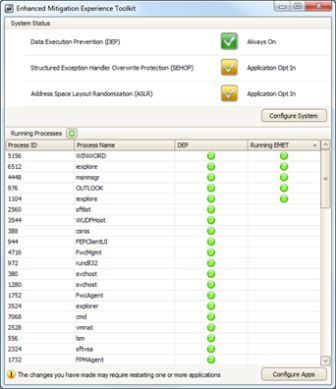 The EMET toolkit supports both 32-bit and 64-bit applications, and activates 14 pseudo mitigation technologies aimed at disrupting current exploit techniques on compiled binaries that does not have such mitigation mechanisms. The security mitigations complement other defense in-depth security measures, such as Windows Defender and antivirus software. EMET installs with default protection profiles, which are XML files that contain preconfigured settings for common Microsoft and third-party applications. Some of the mitigation techniques include:

These pseudo mitigations are not robust enough to stop future exploit techniques, but can help prevent users from being compromised by many of the exploits currently in use. For example, ASLR on Adobe Reader and Adobe Acrobat DLL file named icucnv36.dll will patch the security hole of the Adobe PDF zero-day exploit. The mitigations are also designed so that they can be easily updated as attackers start using new exploit techniques.

What’s the differences of EMET and DEP (Data Execution Prevention)? EMET does not replace DEP, but uses DEP as one of the security mitigation technologies. In other words, EMET, if configured, forces applications to use several security defenses built into Windows, including Address Space Layout Randomization (ASLR) and Data Execution Prevention (DEP). As such, the settings of DEP depends on EMET.

Enhanced Mitigation Experience Toolkit must be configured after installation, or else it won’t do anything. Enterprise IT professionals can easily deploy EMET through Microsoft System Center Configuration Manager and apply Group Policies in Windows Active Directory to comply with enterprise account, user, and role policies. Administrators can customize and configure EMET deployments and determine which applications they want to protect through which mitigation techniques.

Also available is EMET user guide and EMET training video, which can also be viewed below.