Recently a group of researchers from Stanford University has developed a new way of combating snoopers at ATM machine when someone entering the security password for authentication. The new innovation, known as EyePassword allows the users to enter password by using eyes only. In this way, there is almost impossible for third party to snoop the security password intentionally. 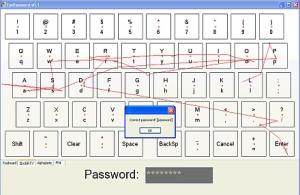 The methodology behind this new technology is the use of an invisible infrared light beaming on the users’ eyes as a sensor to track the eyes movement when they look at the numeric keyboard. When the users stare at the specific location on the keyboard, the camera will sense and track its relative movement and translate it to the corresponding numeric keystroke intended to be entered by them. Bear in mind that normal security authentication system will be locked up whenever there is wrong password being entered three times continuously. So, the sensing algorithm must be intelligent enough by not incurring additional trouble to the users.

Not much information has been disclosed on when it will be released yet. It may take a while but we should expect the usage to be widely deployed on other areas too. Just imagine how nice it could be if you can use your eyes to control the mouse and internet browsing on your PC.