In 1998, the “Today” show started sending co-host Matt Lauer to far off locations like Mt. Everest and Machu Picchu, for a feature on the show called Where in the World Is Matt Lauer? But this week, American broadcasting network NBC decided to send Matt Lauer somewhere he’d never been before… a microsite. In a clever mashup of entertainment and promotion, Matt Lauer now has his own interactive Flash gaming site (followmatt.com). I blog for a site called Brand Appeal and thought this Matt Lauer microsite deserved a closer look.

Using a fun object-based interface, the site encourages users to explore Matt’s possessions on his desk. You can watch clips on his video iPod, check out his car keys (sponsored by by Hyundai), download themed ringtones from his mobile phone, and see all of the places Matt has traveled to by opening up his passport. Visitors can even use his digital camera to upload a brief video clip explaining why they deserve a vacation. Apparently the best sob story wins a free vacation.

By far, the best part of the microsite is the “Where’s Matt?” game. It’s like an interactive version of the children’s book “Where’s Waldo?” Matt randomly gets inserted into different exotic locations and you have to find him. Do it fast enough and you’ll get your name listed in the top 10. When I last played the game someone named “Imus Sucks” was in 10th place. Obviously a reference to the radio host who recently made racist comments about the Reuters University women’s basketball team. Imus does suck by the way. 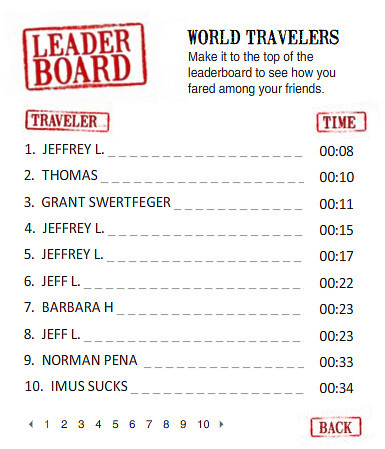 Overall, the online experience is great. However, the execution of this site’s design feels a little disjointed. Several components of the site launch in separate windows making the experience feel less contained. Even though I feel a more controlled experience for visitors is needed (like on my blog called Brand Appeal), the site really does a nice job of pushing Matt Lauer’s celebrity brand and attracting more interest in the Today show. Don’t give a crap about a free vacation or ring tones? Me either. But at the very least check out the “Where’s Matt?” game and try to get your name in the top 10. I did. Just once.