Solitaire, a popular card game originated from France in the early 19th Century, is still taking the world by storm. There’s nothing like solitaire or patience to fill the hours in an airplane or in the office when boredom strikes. It’s a simple game which involves the sorting of cards in some manner to determine the winner. In keeping with the times, Solitaire 3D is a set of three-dimensional variants of the classic card game with sound and animation effects to keep the solitaire fan fully occupied. 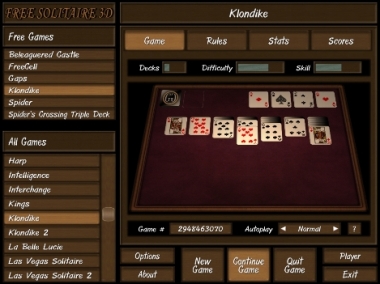 There are half a dozen solitaire variants to choose from. These range from the popular Spider and Klondike to other more original variants including Beleaguered Castle. The games are free and should keep players entertained for hours on end. If you want to play other versions, there is an option to upgrade to a pay package.