With the rapid growing of Android-powered gadgets such as Android smartphones, tablets and etc, this population of devices has become lucrative targets for the financially-motivated cyber criminals. For instance, Google have recently found a couple dozens of Android apps infected with the notorious rootkit malware – “DroidDream” that could steal private information from the Android gadgets. Although Google acted to remove such apps from Google’s Android Market immediately on being alerted, but it would a better situation if a defense mechanism in the Android devices exists to prevent such apps download. 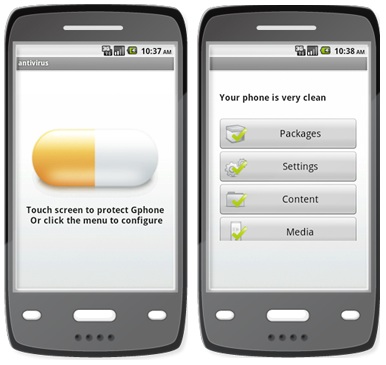 As the malware threat for Android devices is on the rise, AVG’s Antivirus for Android Devices is the antivirus you might want to try. In details, AVG’s Android Antivirus is based on the famous DroidSecurity in which AVG has acquired in November 2010. Both free and premium versions are offered by AVG for protecting the Android Devices.

Here’s the list of protection features available in AVG Antivirus for Androids:

Here are the links to get AVG Android Free Antivirus:

Refer to the guide on how to install .apk onto Android device.