Want to add free game to your iPad, iPod and iPhone device game list? The Big Time Gangsta game from Glu is a worthwhile addition then. Big Time Gangsta is an rich 3D graphics and interactive game, which the gamer attempt to become the strongest thug in the streets of Mission Hill for survival. In this game, the gamers need to build their gang from the bunch of street soldiers, ex-cons and wanted crooks roaming the blocks. 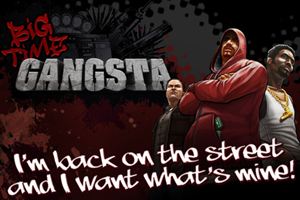 The Big Time Gangsta game is available as a free download for anyone who ages at least 17 years old from App store. This free game works well in iPhone, iPad and iPod with iOS 3.0 and above.