As the 2010 FIFA World Cup South Africa is around the corner, football mania has started to infect the world and beaten up frenzy among football enthusiasts. In conjunction with this quadrennial event, the famous video games developer, Electronic Arts (EA), has lately launched another free-to-play and downloadable sport game, FIFA Online. This famous worldwide soccer franchise was previously offered in closed beta for a while but now offered in public beta for football fans to enjoy once they sign up. 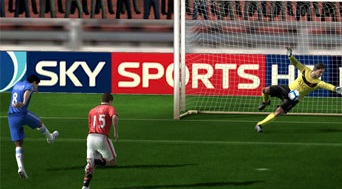 FIFA Online is an interesting multiplayer online football game which allows football fans to manage their teams and compete in a league mode with 500 clubs from 28 licensed leagues and more than 15,000 players. They can buy club manager, train the player, etc to lead their own club to domestic league glory in this soccer game.

The public beta of FIFA online is another free PC sports title. Another similar free game from EA is the PGA Tour Online game. According to EA, the full FIFA Online game will be finalized and released first across Europe and then North America in the next 12 to 24 months before it is released in North America.