Google TV Remote app is a mobile application which can be used to control Google TV from Android phone and iOS devices such as iPhone, iPod touch and iPad. The application has been designed to turn iOS devices such as iPhone, iPad and iPod touch, and Android phone into a fully functional Google TV remote with on screen mouse pad, arrow keys and full range of buttons. 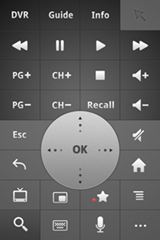