Notepad is a common text-only editor that doesn’t support any formatting. However, many people find it to be very useful with the simple interface and functionality that made it faster and easier to be used for basic text operations. The appearance doesn’t change as well since day one till now, even switching to Windows Vista or Windows 7. If you are bored with its appearance and would like to have a different one, you may want to give Glass Notepad a try. 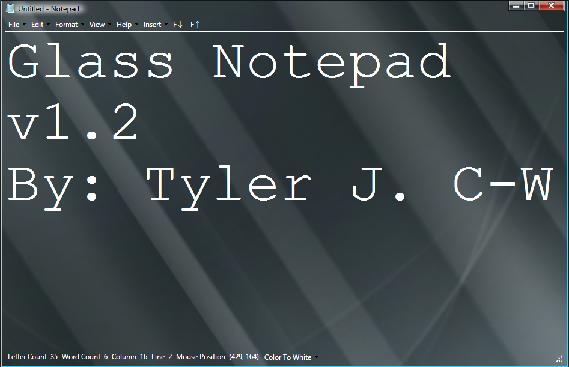 Glass Notepad is a freeware and has been enhanced with glass interface which is aligned with Aero theme on Windows Vista and Windows 7. The glass effect only works on Windows Vista and Windows 7. However, it doesn’t mean that it can’t be run on earlier version like Windows XP. It still can be used on Windows earlier versions but just without the glass effect. On top of this, it also includes an insert menu where you can add date, time and symbol.

The pre-requisite to run Glass Notepad is you must have .Net Framework 3.5 installed in your system. Good thing is, it is an executable file and doesn’t require any installation and only consume 640KB of your hard disk space.