Gmail Smart Recipients Suggestion and Correction Features Live for All

Google has made a pair of smart recipients suggestion features graduated from the experimental Gmail Labs and live to every Gmail users. Dubbed as Don’t forget Bob and Got the wrong Bob? in Gmail Labs, both features intend to help to prevent Gmail users from making two common mistakes of forgetting to include someone on an email, and sending a message to the wrong person with a similar name. 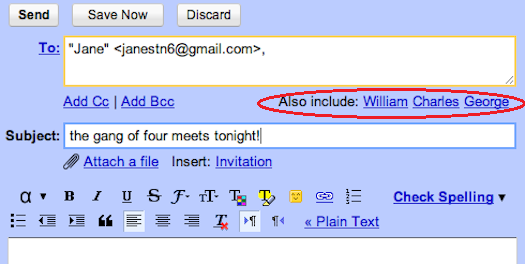 Both of the Don’t forget Bob and Got the wrong Bob? Gmail features are based on the history of user’s emailing styles. Don’t forget Bob can save your precious time during composing messages to multiple recipients by automatically suggesting a group of people you email always, where user just need to click on their name to add them. The Got the wrong Bob? is designed to prevent you from mistakenly adding the wrong person to your recipient list by warning you the recipient who normally not in a group that suit your email pattern, aiming to avoid some embarrassed situations, with suggestions of correct contacts appear below the send to box.

As both features have been officially live on Gmail, no configuration or switch is necessary to activate the feature. The feature should have enabled on all Gmail account by default. Just take note when creating your new email for the suggestion and suggested correction.