The leading developer of video game software, SEGA of America has announced that Golden Axe classic action game is now available for iPhone and iPod touch through iTunes Apps Store. The Golden Axe features the original choice of 3 heroes (each with different strengths and magic powers), giving players a taste of the classic title thanks to the iPhone/iPod Touch technology. 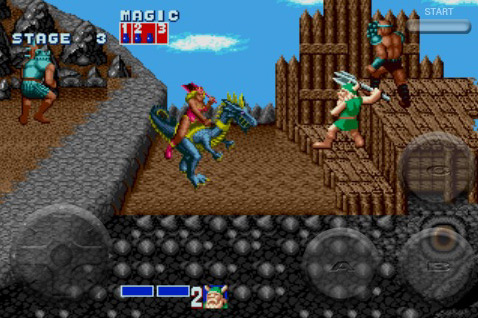 According to SEGA, “Three mighty heroes, a powerful Fighter, a female Amazon, and a mighty Dwarf have a score to settle with the evil Death Adder who has captured the King and his daughter, and holds them captive in their castle. Choose your hero in this classic action game, as you fight through Adder’s henchman as you battle through dark castles, on the back of a giant turtle, and even on the wings of an enchanted eagle with weapon & magic; and even ride the fearsome, fire-breathing beasts.”

The Golden Axe for iPhone/iPod Touch that offers 2 additional levels of the game is available now for download on App Store for $4.99.