In conjunction with Google’s 12th birthday which is being held on 27 September, Google has released commemorative logo, or doodle, to replace the original Google logo appears on the global Google homepage (www.google.com) with an image of cake. This image of cake is created by American painter Wayne Thiebaud, who is famous for his paintings of cakes and other daily objects. 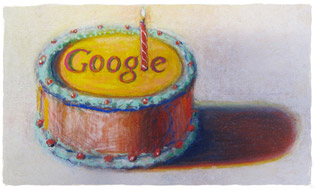 Below are the Google’s birthday logo which has been released by Google since year 2002: