HP-UX11iV3 is an enhancement to HP-UX 11iv2 and the HP Virtual Server Environment. According to HP, this new OS has a few new functions and capabilities. For instance, this new OS has better flexibility in term of capacity. The HP-UX 11i v3 is architected to address up to 100million zettabytes of storage (one zettabyte = one billion terabytes). It enables dynamic addition of memory and processors and thus supports the capacity growth without any interruption. Besides that this new OS also enables the dynamic movement of memory across HP Virtual Partitions for flexible reallocation to needy workloads.

According to HP, HP-UX 11i v3 also has new hot-swap and online patching capabilities that reduce planned and unplanned downtime, and its automation features help minimize operational costs. This new OS version also supports Encrypted Volume and File System (EVFS), an important addition to in-depth layered HP-UX 11i security, and the industry’s first UNIX encrypted volume and file system. EVFS protects data at rest. You can read more about the function and capabilities of HP-UX 11i v3 from Hewlett-Packard. 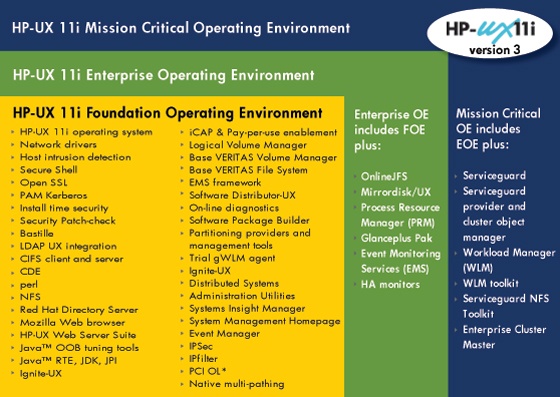