Since the late nineteenth century, fingerprint identification methods have been used by police agencies around the world to identify both suspected criminals as well as the victims of crime. The basis of the traditional fingerprinting technique is simple, that is by comparing the fingerprint pattern. Nowadays, the fingerprint technology has been used wisely in security fields. 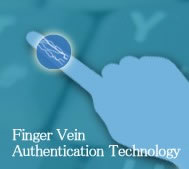 Hitachi has announced the development of a biometric cardless credit payment system which called as finger vein money. With this system, the shoppers can pay their purchases by using their fingertips. What make this technology special is it verifies a person identity by reading the pattern of the blood vessels in the fingers instead of reading the fingerprint pattern.

The credit card holders required to register their vein data by placing finger on vein reader that uses infrared LEDs and a special camera to capture the detailed image of their vein structure.

Before release to the consumer market, Hitachi will conduct a three months fields test of this technology beginning of September in which 200 Hitachi employees will volunteer to use finger vein money at the company cafeteria in Shin-Kawasaki.