Posted: May 14, 2009/Under: Operating Systems/By: My Digital Life Editorial Team

The virtual machine created by Windows Virtual PC, the new version of virtualization software from Microsoft for Windows 7, may be simulated and run in within Windows itself, but that doesn’t mean it lacks features that an actual physical computer have. One such low level component of PC is BIOS (Basic Input/Output System), which does exist in virtual machine too. Much of the modern common BIOS settings can be viewed or changed in VM’s BIOS too, such as system time, system date, IDE configuration, Num-Lock on boot, power management (APM), ACPI, boot devices sequence, and supervisor/user password.

Windows Virtual PC is equipped with AMIBIOS. In fact, the predecessor Microsoft Virtual PC (VPC)‘s BIOS has been modified by hackers in order to perform OEM activation crack. However, in Windows Virtual PC, the access to BIOS Setup Utility has been somewhat skipped and bypassed, due to the new enhanced integration features, which provides devices and resources sharing between host and guest operating system, specifically advanced features such as auto logon to guest Windows OS, and auto publishing installed application shorts to host Windows 7 Start menu. 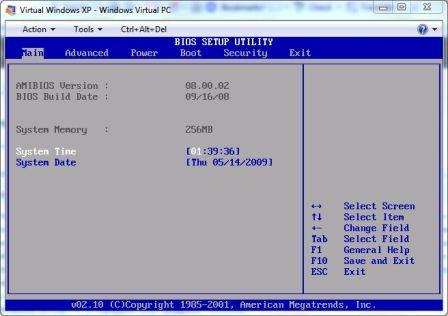 On initial boot up, the virtual machine will perform POST (power-on self-test) sequence with black background screen like most PC computer. At this point, press Del key in order to access BIOS Setup Utility user interface of the virtual machine. 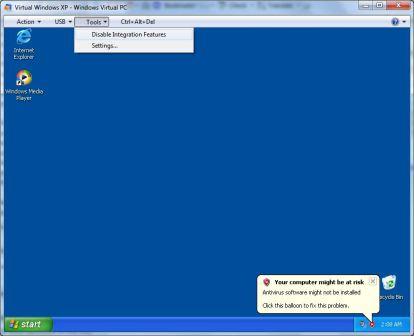 Tip: The POST sequence passes pretty quickly, so do press Del key quickly on boot up. After accessing the BIOS, just click on “Enable Integration Features” on “Tools” pull down menu to re-enable the integration features.