It should be noted that 64-bit Firefox will install only on 64-bit operating system. If you’re using a 32-bit operating system, even if with a processor that supports Intel EM64T or AMD64, then the Firefox x64 is of no particular interest. 64-bit computing has been gaining pace since the introduction of Windows Vista, and has gained momentum with Windows 7 and in particular Windows Server 2008 R2, which available solely as 64-bit product. However, even if you’re running 64-bit system, the 64-bit version of Firefox also requires 64-bit versions of plugins and extensions, where may current plugins and extensions may not compatible with 64-bit browser yet.

So where to download 64-bit setup installer of Firefox?

Obviously, once Firefox 4 is officially released, the x64 Firefox setup installer will be available for download from official Firefox homepage at http://www.mozilla.com/firefox/

However, prior to official availability of 64-bit Firefox, the developers have in fact compiled the Firefox x64 build, and released the x64 build via nightly builds archive. However, do note the the nightly builds directory contains precompiled binaries of Firefox, which are completely untested, and definitely not for production use.

Users who interested to install and run 64-bit version of Firefox web browser can download the build from ftp://ftp.mozilla.org/pub/firefox/nightly/latest-mozilla-central/. 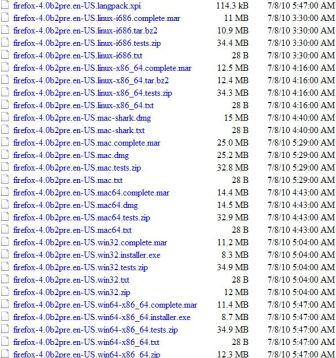 And finally, with nightly builds, there is an update to the Firefox everyday.