When installing Microsoft Office 2010, which Office 2010 Technical Preview version has been released to many beta tester, Office 2010 setup installation wizard will offer to ‘upgrade’ to uninstall and replace or overwrite Office 2007, or any earlier versions of Office suite or applications such as Office 2003 or Office XP with Office 2010.

In order to allow installing of both Office 2010 and Office 2007 (and even Office 2003 or Office XP) side by side together and exist in parallel, Office 2010 has to be installed different directory or folder, so that existing Office 2007 program files don’t get overwritten. Use the following trick to install Office 2010 in addition to Office 2007 so that both applications such as Word, Excel, PowerPoint, Publisher, OneNote, SharePoint and etc can be run simultaneously and concurrently.

Tip: Once Office 2010 is installed, the default program for Office documents, spreadsheets, presentations and other files will be defaulted to Office 2010, but it can be changed manually in Control Panel. A simpler way is to re-run Office 2007 Setup.exe setup wizard, and allow it to repair Office 2007 installation.

To use the config.MSP to install Office 2007 and keep Office 2007 side by side (not uninstalling Office 2007), copy the downloaded config.MSP to the folder that contains Setup.exe and other installation files for Office 2010, and the run the following command in that folder in an elevated command prompt window (or in Start Search or Run command box). 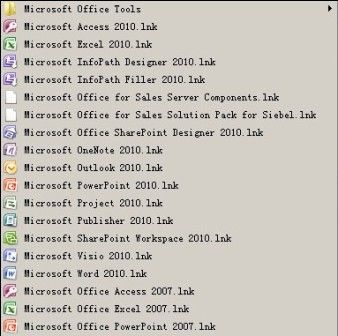