The global designer of smartphones, HTC has announced a new smartphone which is known as HTC Desire HD. The new smartphone has been improved with HTC Sense experience for enhance mobile experience on HTC phones, and most importantly, running out-of-the-box Android 2.2 (Froyo) operating system. The HTC Sense has integrated a variety of multimedia and location-based enhancements as well as a series of new connected HTC services which is called as HTCSense.com.The body of the HTC Desire HD is made from a solid block of aluminum. 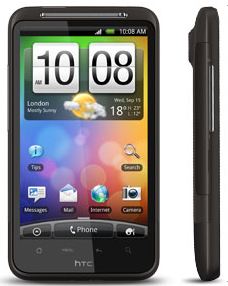 Featured with a bright 4.3-inch LCD display, the new HTC smartphone is also equipped with a 8-megapixel camera with dual-flash and supports 720p HD video recording. It is powered by a 1GHz Qualcomm 8255 Snapdragon processor, integrated with Dolby Mobile and SRS virtual sound. Moreover, it also featured with the new HTC Fast Boot that enables people to quickly make a call or check emails. Android 2.2 also packs a bunch of exciting features such as ability to save apps and games to SD card to make the phone an outstanding replacement for iPhone.

The new HTC Desire HD is expected to be available through mobile operators and retailers across major European and Asian markets from October 2010.