HTC Corporation and Sprint have announced the upcoming launch of its new powerful HTC EVO 4G (exclusively from Sprint), which the companies claim as the world’s first 3G/4G Android smartphone, combining enhanced mobile features with a suite of services built on Android 2.1 OS, aimed for a rich mobile Internet experience. 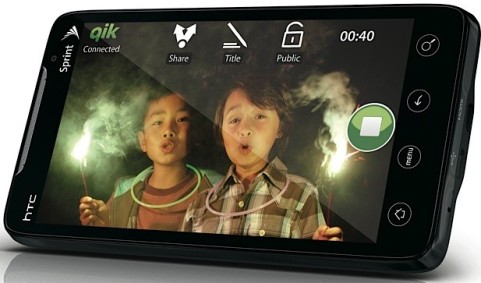 According to the release, Sprint 4G that currently available in 27 markets offers blazing-fast download speeds up to 10 times faster than 3G speeds, making HTC EVO 4G possible to download music, pictures, files or videos in seconds.

“Sprint continues to lead the 4G revolution as we introduce HTC EVO 4G to give our customers an experience that is unlike anything available in wireless to date,” commented Dan Hesse, CEO of Sprint. “Not only is this feature-rich device incredible on our Sprint 3G network, but Sprint 4G speeds will take mobile multimedia, including live video streaming, gaming and picture downloads, to a whole new level.”

“Sprint and HTC have come together to propel the Android platform into the 4G world with the introduction of HTC EVO 4G,” said Andy Rubin, vice president of mobile platforms for Google. “The Android platform was developed to give people unmatched mobile connectivity to the Internet. By combining this vision with the promise of Sprint’s first-to-market 4G technology, HTC EVO 4G makes accessing thousands of applications from Android Market, using Google services like Google Goggles, Google Earth and the all-new Gesture Search, or simply browsing the Web faster, easier and more enjoyable than ever before.”

HTC EVO 4G which measures 4.8 x 2.6 x 0.5 inches and weights in at 6 ounces is scheduled to be available through Sprint, RadioShack, Best Buy and Walmart in Q2 2010, but no words on its price yet.