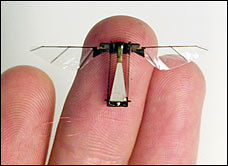 The next time you are talking trash about American President George Bush or planning a political protest in the US, you might want to check the room for bugs… seriously.

According to an article in the Washington Post, insect like robotic drones have been spotted at political events in Washington and New York.

Bernard Crane, a Washington lawyer, saw one of the drones in person. “I’d never seen anything like it in my life… they were large for dragonflies. I thought, ‘Is that mechanical, or is that alive?’ ”

Who made these robotic insects? Are they being used as high-tech surveillance tools? So far, no American agency in the US government admits to having made or deployed insect spies. A defiant Gary Anderson, from the Defense Department’s Rapid Reaction Technology Office had this to say, “If you find something, let me know.”

But even if the US government didn’t make the bugs, you can bet they are at least trying. There are even rumors that the Department of Homeland Security is growing live insects with computer chips in them. In theory, the robotic insects could follow terrorists, listen in on conversations, guide missiles to targets or navigate wreckage to find earthquake survivors.

Is it even possible to have a robot fly like an insect? I’ve never seen any military or commercial aircraft flutter around like an insect. But Pete Valentine, a miniature airplane hobbyist, combined 2 robotic bird kits and made a dragonfly-like hybrid. And just last month, researchers at Cornell University published a physics paper clarifying how dragonflies adjust the relative motions of their front and rear wings to save energy while hovering.

So should we all get really paranoid and starting killing every insect in sight? Even if the the government does have insect spies, you probably have a bigger chance of getting recorded on someones cellphone camera.